4 Issues resolved
126 Company responses
113 Customer testimonials
Call customer care
Write a review
50 Floor is one of the fastest growing shop-at-home specialty retail flooring companies in America. Our success can be attributed to core values of customer satisfaction and using our buying power to offer the highest quality products at the best prices in our market. We have a unique approach to customer service in that we partner with customers through each step of the selection process. This starts with our sales associates meeting customers in their own home to provide flooring options tailored to that individual customer’s needs all the way to calling after installation to ensure our customers were 100% satisfied with their experience.
A family owned business, 50 Floor is "home grown" in Atlanta, Georgia and committed to maintaining a local business feel in all locations across the nation. We achieve this by maintaining a "small company culture" and keeping in touch with the individual communities where we do business.
Show

Have used 50 Floor on three occasions and have been extremely pleased. Our salesman, Bob, was very knowledgeable and helped us select the right flooring (carpet and wood) for our home. I was impressed with how quickly the installation was scheduled (within one week) of our purchase. Follow-up from customer service was appreciated as well. Kay in Marietta, GA Installed September 15, 2016
View full review
0 0
Testimonial 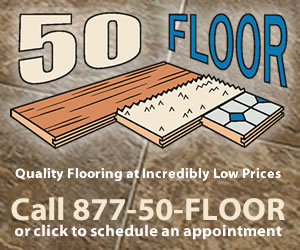 We just wanted to contact you all at 50 floor to say that , We wanted to thank you for the installation team you sent to our house. The guys were amazing and the floor is beautiful!!! They were very professional and did everything in their power to make it a smooth installation experience . Best way to say they were great and are the very best!!!!! Thank you all so much!!! Holly in Atlanta GA
View full review
0 0
Testimonial

Thank you for choosing to contract with 50 Floor. We appreciate you giving us the opportunity to install new flooring in your home. I do understand that you have communicated with the general manager regarding your concerns and now your concerns are resolved. Should you have any other concerns or questions, please do not hesitate to give our customer service department a call. You are also welcome to speak directly with me should you choose to do so.

Thank you for choosing 50 Floor.

50 floors instated a carpet grade below than what I paid for, been trying to address with company here in Orlando just to get a run around!!! Called the salesman, empty promises....he even texted me back thinking he was texting his dispatch and insulted me!!

He was saying I was screaming at him!! I haven't begun to scream yet!! But it's coming!!! If David was on a sales call, he would have been here the next day!!!

Horrible customer service, unwilling to work with me, they even broke my closet door and fought with me about it!!

There's more a lot more, don't think I have enough letters!!! Stay away from this company!!!!!

Thank you for choosing to contract with 50 Floor for your flooring needs. I appreciated the opportunity to speak with you to discuss your concerns for your scheduled floor installation. I am also elated to hear that your installation was a success. 50 Floor installs thousands of successful flooring installations each year. We take pride in offering great service to our customers from beginning to end. Should you have any additional concerns or questions, please do not hesitate to give me a call directly so I may address the matter(s) for you.

After several discussions, 50 Floors did send the proper crew to do our floors, and I must say that they did do a very good job. Thank you to Jorge and the rest of the crew.

We were told that the furniture, that was SEEN by the salesman, would be moved. We moved everything else that could've been in the way as so instructed by 50 Floor, so on the scheduled day, two men were sent, to my surprise, because I was told that it would be 3or 4 guys.

I myself do not know anyone that has toy furniture. We have real full size bedroom sets. These two men looked at my furniture, called the manager to say they were not doing the job, and without letting me know.....just left. Where is the professionalism in that or that of the company that could not send another crew.

Now we are told that it will be tomorrow.

Does anyone care the condition we are living in now? This is horrible!

Fifty Floor - All the way through a great experience

Very impressed-from sales person,scheduling,installers to quality assurance manager. All the way through a great experience. My installer, Isidoro Matias, was a real perfectionist. I will most assuredly call 50 Floors when ready to do my downstairs. Debbie in Powder Springs GA
View full review
0 0
Testimonial

I can't say enough good things about 50 Floor. I was very skeptical that they could carpet 3 bedrooms and replace flooring in 2 bathrooms in one day, but they did it all in 8 hours. Antonio and his crew were great. The installation and products are top-notch, and they left everything clean as a pin. Beth in Snellville GA
View full review
0 0
Testimonial

Great, GREAT company!They are thorough, consistent and experienced.They do what the say and follow through with all their work. I had carpeting installed and it was a great experience from start to finish. Their sales rep wasn't pushy or rude. I had another flooring company come out for an estimate and he made me feel terrible because I didn't sign on the dotted line that second.He told me coming to my house and not scheduling me for an install was a waste of his time! 50 floor also did my porcelain tile work a few months ago and it came out just as amazing! I had one spot of carpet that needed to be tacked down a little better, one call and it was fixed immediately!Awesome company!I wish all places were as pleasant to deal with. Melinda in Saint Cloud Fla
View full review
0 0
Testimonial

The installer (Sosa) and his crew at 50 Floors did an amazing job on my floor when installing the product. They were very professional, they did a courtesy call 2 hours before arrival, everything and everyone was professional when entering my home, start to finish. I like how everyone played a part in installing my floor. They consistently stayed in contact with me, letting me know if there was a problem and asking me "How do I like the floor?) I would highly recommend (Sosa) and his crew to any of my friends and co-workers. Great job guys!!!!! Eric in Douglasville Ga
View full review
0 0
Testimonial

I am completely satisfied with my new floors. The installation was fast (2 days) and they removed carpet, tile and laminate. The quality of the floors is top notch and my installation team was the best! Patricia in Wimberley Tx
View full review
0 0
Testimonial

Thank you for taking the time to submit a review regarding your experience with 50 Floor. I do understand that 50 Floor has resolved your floor matters now. We truly appreciate you choosing 50 Floor for your flooring needs and apologize for any inconveniences that may have been caused to you. You are welcome to give me a call directly should you have any additional matters to address.

As I see my post is not showing It Took 2 weeks to finish. Never showed up.

Stove and regf. moved to dining room And they didn't come back. Talked with Tim in Nashville said he will com. something for everything we when threw Never happen.

And no one every call or gave a ***. Just lies. What happen 50 floors ! The only person that was good was the salesman, boy were we fooled.

And my dining room floor is not level as it was before. Took all my dresser drawers out and said you have to ut them back in. The salesman looks like a fool. As of July 15 I will post this ever were I can.

I would hate for someone else to spend this kind of money and get screwed. And I still have to do the other half of my house.